Chef Adam Simmonds eXclusive. “Testing Times”
SOLD OUT! This GourmetXperience is no longer available. Thank you for your support. Please re-search.

Chef Adam Simmonds isn’t one to shy away from a challenge. Over 28 years, he has worked and been trained at some of Britain’s most renowned kitchens, under some of the world’s greatest chefs including Marco Pierre White, Jean Christophe Novelli and Raymond Blanc.

He has twice earnt a Michelin star, was named Hotel Chef of the Year at The Cateys, and won the starter course on the BBC’s Great British Menu.

Unfazed by a phenomenally successful career, he has taken on his toughest test yet: a completely open, small pop-up restaurant in London’s Soho. Named ‘The Test Kitchen’, his tiny, temporary restaurant opened in April this year and has a short lease that extends until March 2018.

The restaurant is a return to the capital for Adam who has recently spent time as head chef at Michelin Star Danesfield House in Marlow and The Bath Priory.

“It’s an opportunity to test out ingredients, suppliers, staff and customers” before he launches a more permanent project next year. As a pop-up restaurant with a short lifespan, Adam isn’t expecting to add any more stars to collection and is enjoying the freedom of cooking purely for the customer and not for accolades.

A pop-up is no easy option, especially for an established chef with a reputation to maintain. The Test Kitchen is essentially one big chef’s table where diners and chefs can interact while dishes are cooked up and served in front of them. There is no place to hide and space for the small team of eight staff is at a premium. Everything they do is under scrutiny from the customer.

It’s a vibrant and fun atmosphere for the customer, although Adam confesses it’s been a whole new experience for a chef who prefers to keep himself to himself.

It is completely open, diners can see and watch exactly what’s going on. You can’t have a bad day, there is no hiding place. People naturally want to talk to you.

At the beginning that was quite tough to manage. Usually I keep myself to myself but you can’t do that. I have had to look at myself and be more open.

Adam sees the restaurant as a learning experience for himself as well as for diners wanting a glimpse and a chat with the award-winning chef and his team. I have learnt masses about business and what pitfalls to look out for. We’re forever changing and improving things.

Other challenges, have been working in such a small space in close proximity to front-of-house staff, kitchen staff and customers. “There is very little space and we’re constantly on top of each other. We have to work clean and tidy. Having limited storage space means we can’t over- order food and have to be a lot more efficient. We try to limit the amount of food waste, and use around 15-18 suppliers, having regular small drop-offs on a daily basis.”

Adam likes to support British producers where possible, sourcing much of his meat and seafood locally. With rising food prices he says it is vital that chefs become more creative in using cheaper ingredients with skill and imagination. “A key ingredient in some of the best restaurants I’ve worked and eaten in, is to bring something surprising to the table. It’s not necessarily about expensive produce, it’s about using more economic ingredients and giving them the ‘wow’ factor. It’s no longer about fois gras and caviar. From a business point of view you have to be cost effective. I like to create dishes that are simple in approach but complex in structure.”

Adam admits that the truly open restaurant experience isn’t for everyone, and is philosophical about the occasionally negative review amongst the overwhelmingly positive ones online. Within the first few days of opening he received a visit from renowned restaurant reviewer Jay Rayner, in which Adam was sorry to receive what he describes as a ‘kicking’. “It was hard on the team. It was still in the first few days of opening and we were on tenterhooks. There are things that we’ve taken on board and we’ve reaped the rewards of those changes and will bear some of the points in mind when we launch our permanent site next year. Having said that, our reviews by the genuine paying public have been positive and supportive.

“The Test Kitchen is the ultimate shop window for what we’re all about. It’s a fun, vibrant and exciting experience that offers something a bit different. It’s cool and completely transparent.” Adam is still seeking the perfect spot for the new restaurant but is expecting to create a similar concept in the capital as his pop-up.

“We’re learning a lot and will bring some of our best ideas with us while leaving behind the ones that don’t work so well. It will be open plan but there will be more space, so the interaction won’t be quite as full-on!” 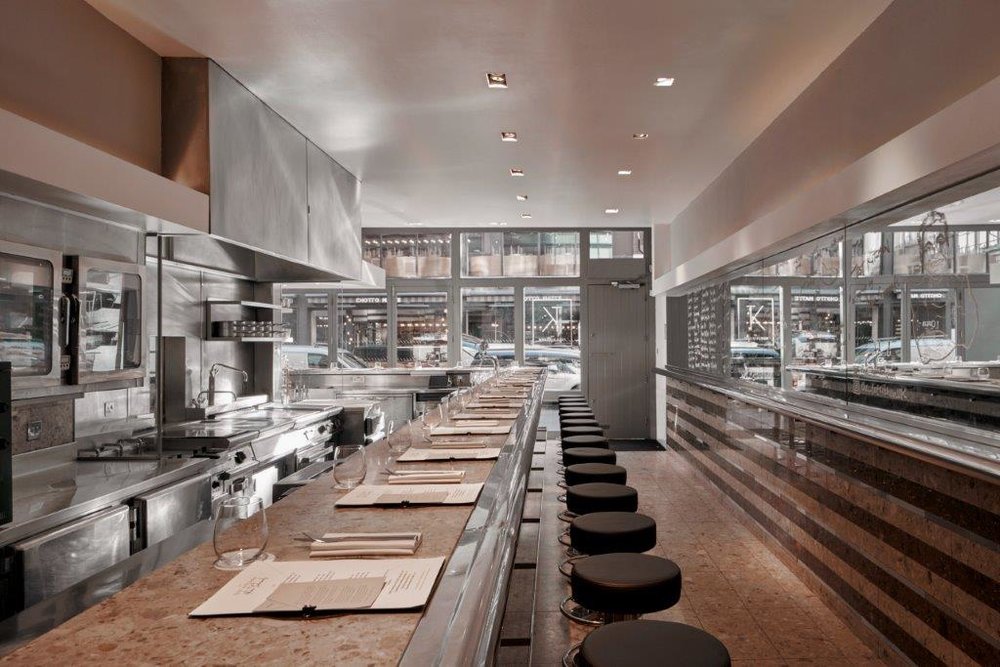